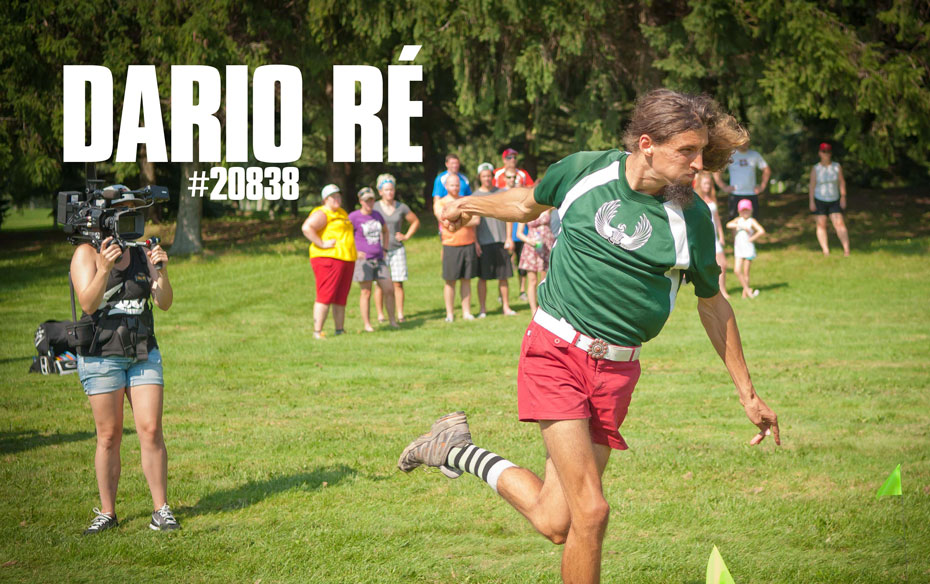 With the change of time and the cold weather, another disc golf year is wrapping up heading into the slow season. It is time to present to you this year’s very best Disc Golf player of the Province of Québec. Here is an interview I did with Dario Ré, only days after he won the 2015 Provincial. You can get it translated in french here as the original Q&A was conducted in Dario’s native english.

LL: Hey Dario! Thank you for taking the time to talk to us. We are very pleased that you’ve accepted to do this quick interview with us. I see this as a great way to get to know the indisputable Quebec Disc Golf Champion a little better…

LL: Looking into you over the internet, I learned from your website and facebook page that you are pursuing a Master’s in Art History, have a musical career and a band as well as your family life with your partner and kids. Your disc golf ‘gig’ seems to be in the background of all this, yet it is very impressive with many highlights that include things like:

• top25 positions in some of the U.S. National Tour events the following years

• a top10 position last year at the Green Mountain Championship @Smugglers Notch in Vermont, with about only well known names like Simon Lizotte, Will Shusterick, Ricky Wysocki or Steve Brinster ahead of you

• same event this year, you tied for 6th, this time even ahead of Lizotte and with one of the hotest 1st round, putting you on the lead card with Wysocki & Brinster during round 2 (video here from 13:45)

• last june, a 2nd position at the Canadian National in British Columbia

• 2nd for this season of the Quebec Disc Golf Tour, right after QDGT’s Champion Pat Huot, but playing only 5 of the 12 tournaments

• and for the 2nd year in a row, you’ve completely dominated the Provincial Championships!

All this makes you somekind of a ‘McBeast’ but for the province of Quebec…
What’s next for you, as a disc golf player, in the years to come?

DARIO:  You are certainly right in that I have several parallel pursuits and two young boys. As far as disc golf being in the background, that has depended on the period of my life —at times it has been the focus and at others more of a pastime.

The years to come will speak for themselves but what I crave are the high stakes. I plan to focus my energy on the preparation for big tournaments and to further refine my practice routines. In short, I anticipate competitive disc golf stepping further into the limelight and, as far as next year is concerned, you can expect to see me again at the Quebec Provincial Championships, a handful of A-tier and National Tour events as well as the USDGC in Rock Hill, South Carolina. I am incredibly fortunate and thankful to have such a supportive family and wouldn’t be able to pursue a career in disc golf without their trust and love.

LL:  I’ve had the pleasure of playing a full casual round with you at the Provincial’s practice day last year, on the advanced course, and I must admit that seeing you play that day has been a big part of why I’ve been wanting to get better at disc golf ever since.

So, for disc golf players that haven’t seen you play, what ‘style’ of player would you say you are? Like backhand traditional, or more of a ‘new school mix’ using both backhand/forehand, or maybe your putting style…  and is it what makes the backbone of your obvious domination of the whole Quebec disc golf scene at the moment …or may it is something else?

DARIO: I’ve always been enamored by the diversity of throwing discs, so this has led me to practice unusual lines and trick shots. Even in a casual setting, I want every shot to be as good as possible and to contribute to my development as a player. Thus forehands, rollers, high lines, etc. have all become integrated in my game. Early on, my tournament-self realized how crucial consistency was to scoring well so I began practicing for consistency; practicing the way I want to play in tournaments. When I talk about consistency, I think not only about the scope of a round or a tournament but also of a season or a career.

So instincts aside, which I’ll get to in a minute, my style is to take very calculated risks and, for the most part, throw the shot with the least risk and highest percentage. This leads me to throw a lot of backhand hyzers and straight flying shots landing on the side of the basket with a tailwind putt. So for me, this is the crux of scoring well. However, I believe instincts —or the infamous “gut feelings” are essential to disc golf and thus I will follow these above any odds. This is also where the fun and excitement happens.

If I notice a gap in my game, for instance the incalculable number of strokes lost on forced finesse forehand approaches in the 2014 Green Mountain Championships, I focus exclusively on that shot until I feel confortable. So again, coming back to your question, I think the crux of my success thus far has been in having the potential to make any shot the course has to offer while simultaneously leaning on my strengths and the odds of the fairway. I also have very systematic practice routines which I think goes without saying is essential if you want to play to your best potential.

LL: And now, lets talk plastics… That was the very reason I wanted to do this interview in the first place.

Right after this year’s finale at the Provincial, you were kind enough to show me what disc you had used for that impressive backhand roller drive, on a very densely wooded hole of the advanced course — that’s #17, a par 5 close to 700′ in length, with mando right off the tee and sandboxes all around the basket — a make or brake for any of the competing players!

With a big smile, you took that very beaten Innova champion 12x Teebird out of that nothing fancy tourney bag of yours. I stood there, pretty happy to get an answer, but wondering what was every other discs in that bag.

So, last question; what’s in your bag and what disc are you using for what kinda throw?

DARIO: First, I’d like to say that I really appreciate “in the bag,” not from a consumerist standpoint because, let’s face it, what’s important is to know your discs so that you can trust them in the heat of a tournament not to buy more discs in search of better flights but because it’s a little window into the choices we make on the course. I’ve learned a lot from asking players what discs they use for certain kinds of shots. I remember being an aspiring pro who was starting to throw pretty far and thinking ‘are these guys throwing putters 300 feet off the tee to showoff or what!?’ The answer is no, well, maybe sometimes, but mostly because gauging down a disc (ie. throwing your midrange harder as opposed to throwing your driver softer for the same distance) allows for a more consistent stroke, better follow through and requires more spin on your shot to execute it well, which is very important for overall control. Also, for players who throw far but not particularly accurately yet, the slower discs are less squirrely and don’t penalize mistakes the way drivers do. It’s about consistency.

Gateway Wizard (firm) – this disc is designated for putting and I don’t throw it more than 60 feet. I want it to only know chains.
Gateway Magic (soft) – this is also designated for putting (as long as you open up the term a bit). I use it for spin putts, low ceilings, long jump putts and when I need a stiff anhyzer line. In general it has a bit more glide and doesn’t finish left like the Wizard.
Gateway Wizard (soft) – nice and worked-in this is my all-purpose driver/chipper workhorse.
Gateway Wizard (firm) – this one stays new and is designated as a thrower. I use it where I would the soft Wizard if there is wind or if I need a hyzer line to break sooner, a subtle flex or to penetrate further left and/or skip.

Gateway Demon – I use this for spike hyzers, control flex shots, wind control, skip shots, and grenades and hyzer putts as needed.
Innova Roc3 (Champion) – gliding hyzers.
Innova Roc (KC Pro) – I like these nice and worked-in at which point it can ride a rope gliding left, right or straight as needed.
Innova Roc (DX) – very beat-in I use it for hyzer flips, anhyzers, and control rollers.

Innova Firebird (Champion) – another workhorse: wind control, spike hyzers, skip shots, flex lines, sidearm rollers and overhand shots.
Innova Teebird (Star) – this is nice and worked-in and acts as my go-to driver: hyzer flips, gliding hyzers and it too can run a rope gliding left, right or straight.
Innova Teebird (Champion) – I keep one new for control shots in the wind, flex lines and hyzers that need extra trust.
Innova Teebird (Champion) – absolutely beat and I use it for backhand distance rollers, long fading anhyzers and hyzer flips.
Innova Eagle (KC Pro) – this is absolutely mind-bogglingly beat and I use it primarily for control rollers but occasionally for extreme hyzer flip lines or distance if footing and/or elevation are extreme.
Innova Thunderbird (Champion) – this is a fairly new addition to my bag and flies a very similar line to my Teebirds but with more distance. I can also throw it on a lower trajectory so if there is ceiling or I need distance with strict control this is the one.

LL: Wow, now this was a detailed answer!

Again, I want to thank you for taking the time to answer these few questions with such great precision and we are looking forward to see you playing in the coming full round coverage of the Pro division final 9 at the 2015 Quebec Provincial Championships.

Any last words to finish this one?

DARIO: The fact that we have the opportunity to share with the greater virtual world, through video coverage and blogs like yours, the growth of disc golf here in Quebec is amazing. So I too am looking forward to the Final 9 video and am very grateful that the organizers behind the Quebec Provincial Championships have managed such beautiful documentation. Thanks again Louis for all of your work and everyone here in Quebec who has a hand in growing the sport.